Taste of the Old Country: Haupia

There are a few foods from the land of my childhood that instantly take me home, and that I'll even admit to craving once in a while. Spam is the stereotypical Hawai'i food; I don't crave that very much any more, but who can resist once in a while?

Malasadas (from Tex's Drive In, not homemade), the Portuguese fried dough, do it to me too, even in these carb conscious times. Boiled peanuts, kalua pork, a good poké...

The other day, I got a craving for haupia, Hawaiian coconut pudding. And rather than ignoring, I decided to take action.  Here's the ghostly white result. 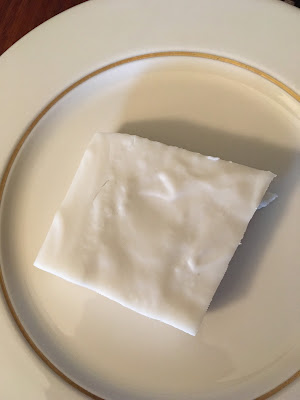 I don't understand why I've never made this before.  Sugar, cornstarch, a little water, and a can of coconut milk.  It's pretty fool-proof, and if not the healthiest, not the unhealthiest, either.

It definitely reminded me of my native land, in a good way.  And it drove home to me what a good canvas haupia would be for other flavors.  I'm thinking I should make it again but add some crushed cardamom pods during the simmering phase...  Maybe middle-eastern/Hawaiian is the next big fusion cuisine?

Posted by GothamJoe at 4:00 AM

Last week I spent a few days in Las Vegas, where I spoke at a conference.  On the advice of a friend who knows these things, I stayed at the Golden Nugget, downtown, well away from the Strip.  In retrospect I'm not so sure of the wisdom of that advice (though the Carson Tower, recently renovated, has great rooms very affordably).

However, it was an opportunity to put to a test the mythical Las Vegas breakfast buffet.  And sure enough, for $14, I had one of the most epically weird meals I've ever had.  Feast your eyes: 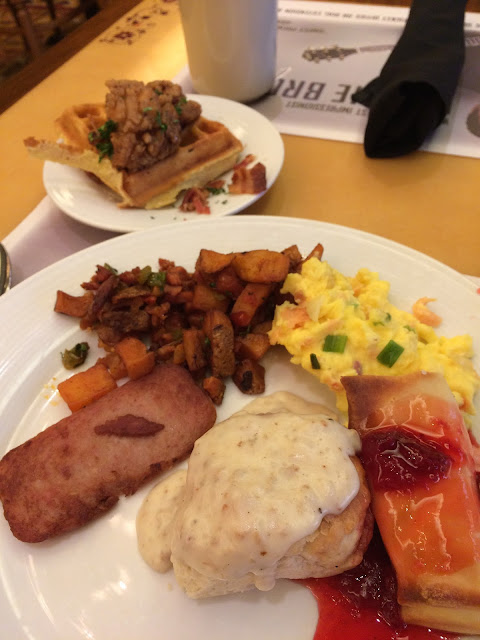 In case you need a guide, there's some breafast potatoes with chorizo, an egg scramble with smoked salmon, a cheese blintz with strawberry sauce, a biscuit with gravy, a slice of spam (here's to Hawai'i nostalgia), and off to the side, a quarter of a waffle with a chunk of fried chicken on it.

Not pictured is some assorted fresh fruit.

The only thing that would've made it weirder would've been if they'd had Japanese breakfast items to mix and match; a bit of grilled fish and some sticky rice or miso soup.  Probably they did have those things and I just overlooked them. And probably that's a good thing.

Still, I couldn't have asked for better fuel for a long day of meetings, conference sessions, and racing around a very large convention show floor.

Posted by GothamJoe at 6:00 AM