Two years ago now my friend Rachel and I took a pasta making class together at the Institute of Culinary Education.

A couple of weeks ago, we finally had a chance to put what we learned into practice, using her spiffy Kitchenaid stand mixer.  It was incredibly easy -- much simpler than kneading pasta dough by hand! -- and the results were fairly amazing.  Which is dumb because every single (rare) time I've made pasta from scratch I've ALWAYS said something like "the results were fairly amazing."  And yet, how many times have I made pasta from scratch?  Not enough.  Not nearly enough. 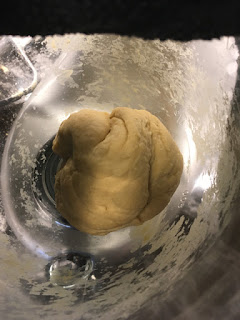 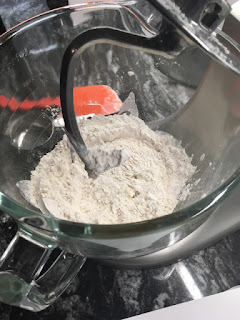 And following a short rest and some liberal flouring, the rolling went super smoothly as well. 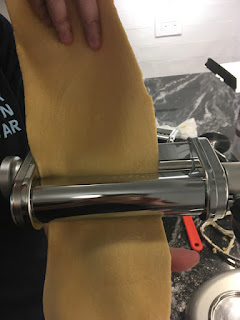 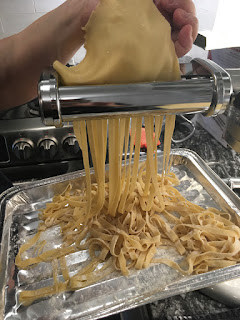 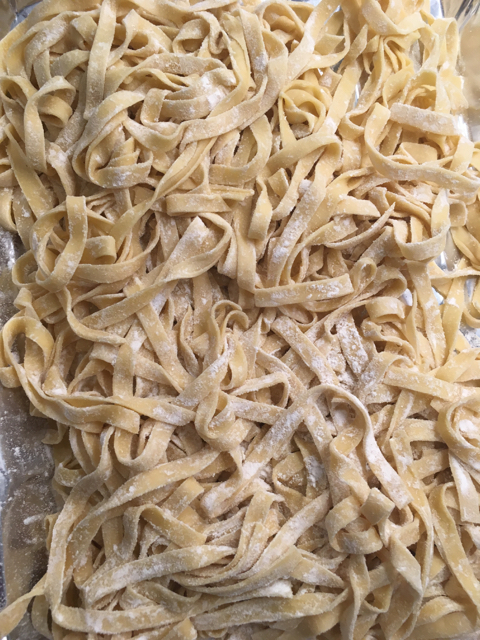 So lovely. Below is the post-cooking version, with apologies for the slightly steamed-up camera lens. 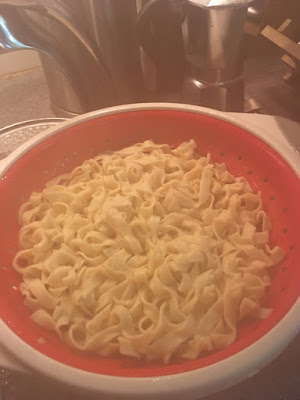 At Rachel's suggestion, we tried Marcella Hazan's famous/infamous (but new to me) tomato sauce.  It's barely a recipe:


Take a can of whole tomatoes, 5 tablespoons of butter, an onion that you've peeled and cut in two, and a little salt, and throw them in a pot for 45 minutes, stirring and occasionally smooshing the tomatoes a bit.  Remove the onion halves.  Done. 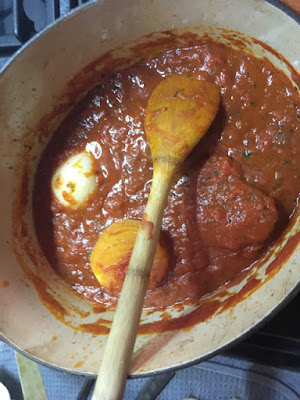 You can see why I was skeptical.  But holy crap was that good.  It makes me rethink the whole idea of cooking Italian food with olive oil.  I insisted on adding a little fresh basil.  I make no apologies for that. 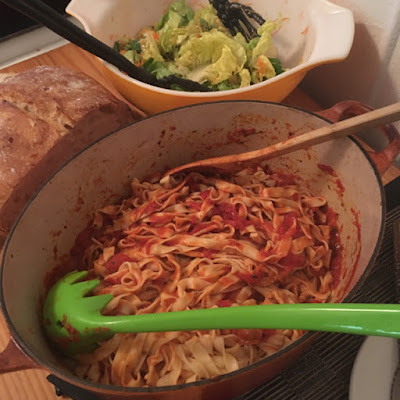 Such a good, simple, hearty meal.  And good fun to make and share it with a friend.

A couple of notes.  Since the sauce is so simple, using super-good tomatoes is imperative.  I hunted around a bit and I think Cento San Marzanos are the ones to beat.  Delicious, Italian, and the can is BPA free, which I look for in cans these days. 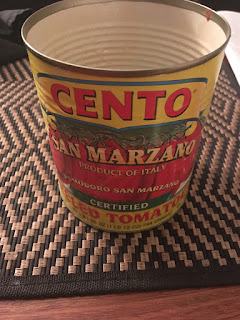 Also, the recipe from ICE said to use 100g of flour plus 1 egg per person.  We were skeptical, so we ended up using about 300g of flour and 3 eggs (and a small amount of salt and olive oil and water).  That made a LOT of pasta.  I had leftovers for dinner for most of the week.  I am not complaining in the least, just stating for the record that, yes, 100g of flour is more than enough for 1 serving of pasta.

Finally, I made a loaf of bread, since there might not have been enough carbs otherwise. So here's a picture of that too. 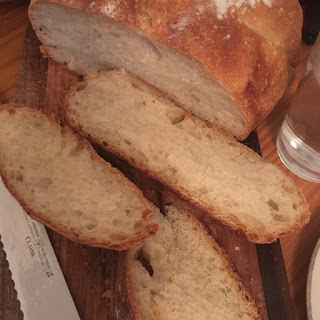 Posted by GothamJoe at 6:35 PM

I had heard of Aldi, a culty value-centric European grocery store that fans apparently obsess over, for some time -- I remember reading a Times article about it a while ago, I think.  But I didn't realize there was one semi-close to me until fairly recently.  My wanderings in the city don't often take me over to East River Plaza, the very un-Manhattan complex at farthest east 117th street, featuring ample parking, Manhattan's one Costco, a giant Target, and assorted other suburban fixtures.  And, it turns out, an Aldi.  Always curious about new grocery experiences, and always in favor of saving money, I headed that way last week.

I deliberately wanted to keep myself objective about Aldi, so I didn't do any research beforehand, didn't look up best values, or just why it's so beloved.  I knew nothing beyond the string of adjectives in my opening line. 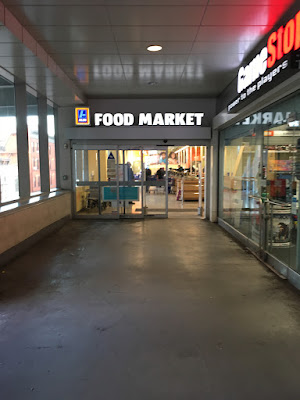 Aldi:  Right next door to Gamestop!  This is definitely the most suburban I've ever felt on the island of Manhattan. 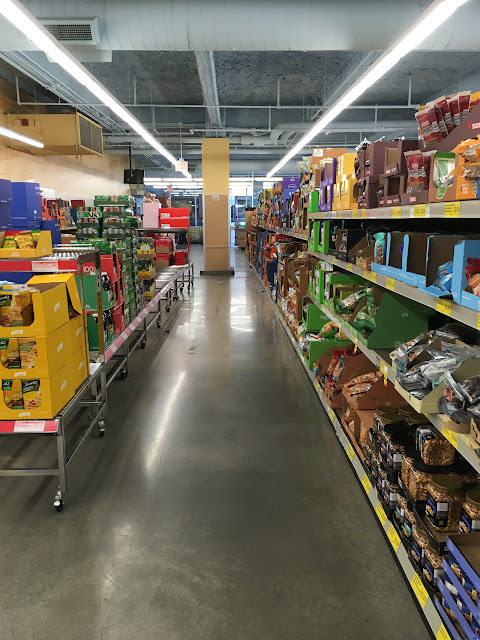 This picture is a good summary of my impression of Aldi.  It's not much to look at.  Definitely cheap.  But nothing is presented in a way that makes you want to try it, take a chance, get something new.  Unlike the other notable culty grocery store, Trader Joe's, which takes merchandising and presentation and friendliness to new heights.  Aldi seems to say "we're cheap.  Don't expect anything else."  Produce was...there.  I was a little iffy about it.  Four bucks for a pound of medjool dates, though. 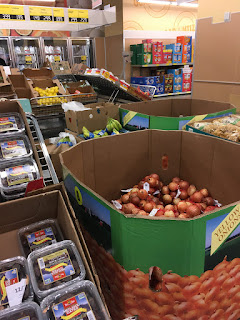 Brands were an interesting thing.  There isn't an Aldi brand like there is a Trader Joe's brand, but it definitely leans heavily on various store brands.  And yet there were familiar brands in the mix, seemingly at random, as well.  It was, truly, a lot like a European grocery store.  Everything was just a little bit off.  Check it out, honey nut cheerios, alongside several varieties of "crispy oats."  And above them, "honey crunch 'n oats." 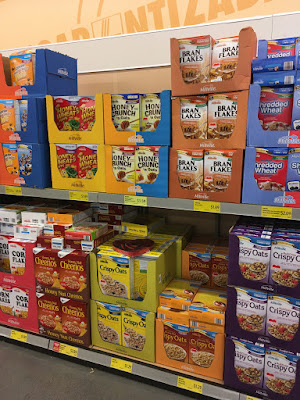 The things Trader Joe's excels at, like bread and pastries, and odd and interesting cheeses, were  disappointing at Aldi.  Some staples were there, and things were, again, cheap, but for me at least, little was enticing.  Bagels were pretty repulsive, though I think that about all prepackaged bagels. 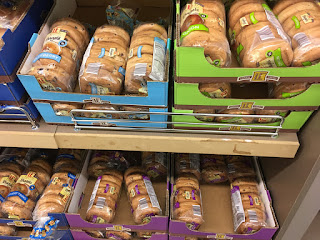 And I won't even really talk about the terrifying and awful concept of frozen sushi, except I will.  What the heck is frozen sushi?  I should've bought some just to see.  But I was scared of it, and beyond skeptical.  Also, this freezer case is another good example of Aldi's general lack of care and presentation.  You might see that sort of chaos at a TJ's late on a very busy day, but it would be short lived.  I was at Aldi on a sleepy weekday afternoon. 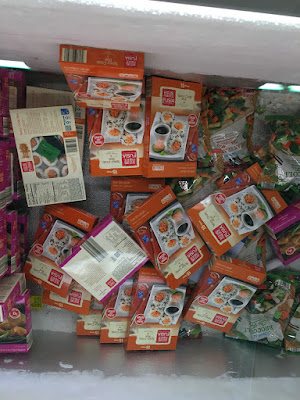 So what did I get?  I spent $40.43, and came away with dates, a great price on maple syrup, almonds, ground turkey, ranch flavored sesame seeds, some awesome bacon, brussel's sprouts, corn chips, black beans, chicken sausages, and dark chocolate cashews.  Not a bad basket; I imagine if I'd bought equivalents at my local Westside Market I would've spent maybe $60 or even more.  And everything I've had so far has been tasty, although nothing has me wanting to go back to pick up more. 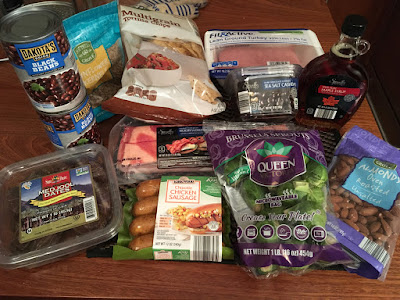 I have spent a small amount of time seeking hymns of praise to Aldi.  Slate and the Daily News both have them.  The Daily News writer treks across town for a particular kind of face cream.  Fair enough. And the Slate writer basically likes that Aldi has lackluster-to-bad customer service. Because in her mind it means the groceries are better (for some reason) and she has a general fetish for the German way of doing things. I'm not persuaded.

However, the Slate piece also informed me that Trader Joe's and Aldi are estranged corporate siblings, started by estranged real siblings.  Read the article, I had no idea -- it's fascinating.

Finally, I realize Aldi's far East Harlem outpost may not be representative, just the way the madness that are Manhattan's Trader Joe'ses (how do you pluralize Trader Joe's, anyway?) is nothing like a TJ's experience other places.  So I generalize with great care.  I can't imagine making a special trip just to go to Aldi again.  It's cheap, but the time and energy required aren't worth it.  If you're in the neighborhood and need economical beans or dates or slightly weirdly branded cereal or chips, though, by all means, stop on by.
Posted by GothamJoe at 9:25 AM

It's not a dog or cat or gerbil or even a tarantula, but I'm happy to introduce the world to R, my sourdough starter.  R was a gift from my friend Rob, in whose shadow as a bread baker I humbly stand. He makes his own baguettes, even. I mentioned to him a couple of weeks ago that I was thinking of starting my own sourdough starter and he was like, "really, dude, it's not worth it, just take some of mine."

And without further ado, R was, well, I was going to say "born" but that's not exactly accurate.  Decanted.

Here is R in its resting state, safely ensconced in its jar. 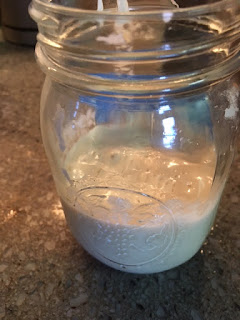 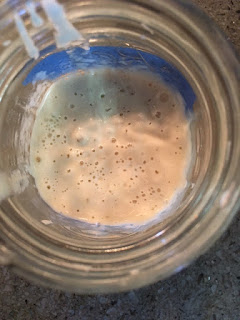 And here's R tucked away in my fridge, where it'll be spending most of its time. 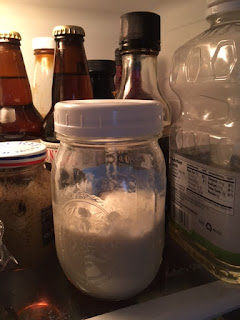 Next this is R in its active, growth phase, having just been fed and about to spin off some starter for making my first ever loaf of sourdough bread.  Doesn't it look bubbly and perky? I bet R would have like a thousand followers on Instagram, like a certain pug I know.  (Digression: searching for 'yeast' on Instagram, which I don't necessarily recommend, does yield two gems:  "Yeastie Boys Bagels," and "Yeast of Eden."  Bravo!) 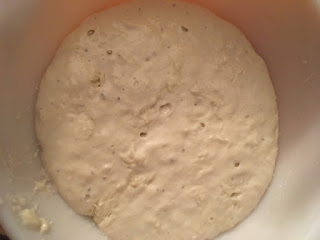 And here's the product of my and R's collaboration. Cook's Illustrated's no-knead sourdough recipe from issue 142 is what planted this whole idea in my head.  It was an almost 40 hour process to make this loaf (albeit, most of it waiting around while R did its thing and gluten formed and such).  I made a project plan spreadsheet and everything. 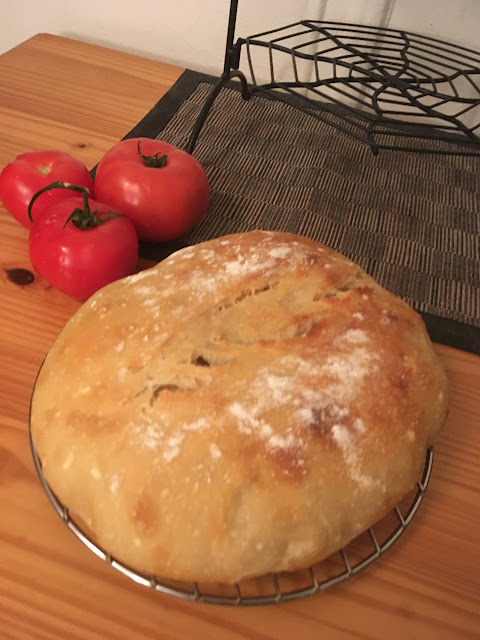 And check out the inside.  The crumb needs a little work -- I think maybe some (more) kneading is in order?  But I was really happy with the flavor, not too sour, but definitely tangy, and amazing that thanks to R the only store-bought ingredients I need to make a loaf of bread are flour and a little salt.  Made some superb BLTs. 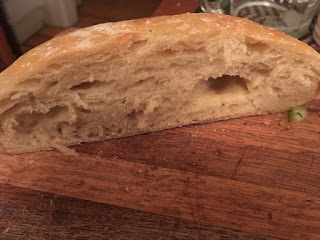 I'm finding I like having a companion.  Even if R doesn't know me or come when I call, I still have to feed it and keep it perky.  And how many pets can you eat a chunk of from time to time?

I will close by mentioning that R is partly named after Rob (duh) but it's mostly named after R, the undead hero of my favorite zombie romantic comedy (or "zom-rom-com" -- I didn't make that up), Isaac Marion's beautiful Warm Bodies.  Seemed somehow fitting for a jar filled with wild yeast and who knows what bacteria.
Posted by GothamJoe at 3:30 PM