My friends R and S, of the Night of Two Souffles and the 2016 Ottolenghi Dinner, and I had been kicking around ideas for another themed feast for a while now.  S mentioned she'd been wanting to make a feta cheesecake from Honey & Co. and I said, half jokingly, well, we could do an entire meal around cheese.

And then that's what we had to do.

I'd been wanting to try making gnocchi for a long time. I recalled a Cook's Illustrated ricotta gnocchi (or in Italian, gnudi) recipe that sounded fun and cheesy.  Like the insides of ravioli, without the outsides.  Or, "nude" ravioli.

I made the dough, and we did the cutting and cooking together.  It was sticky, and I can't say they were terribly pretty.  And in another strategic error, we were pretty hungry, so I think overly enthused about dumping a whole lot in the pot at once rather than a few at a time. So while the batch you see cooking here turned out great, many of the ones after this ended up a bit clumpy.

Still, though, with a brown butter, shallot, herb sauce, it's hard to find any nits to pick. 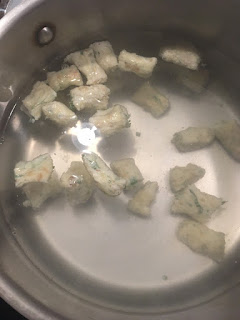 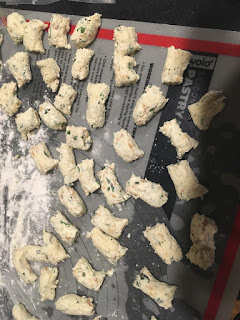 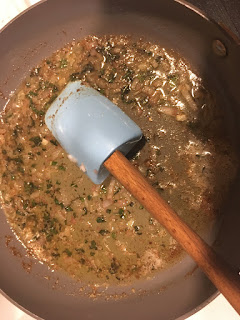 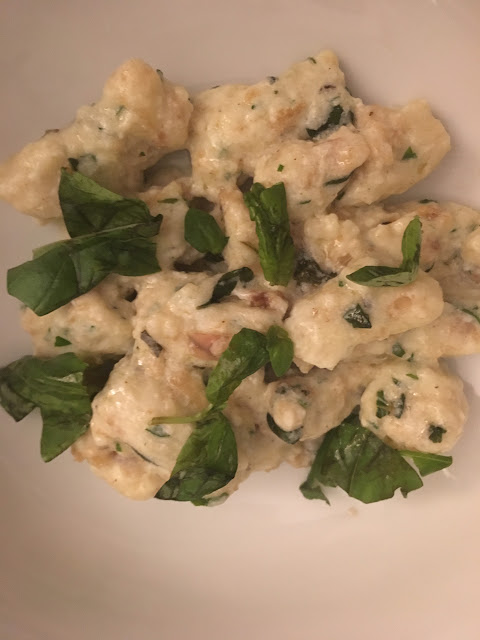 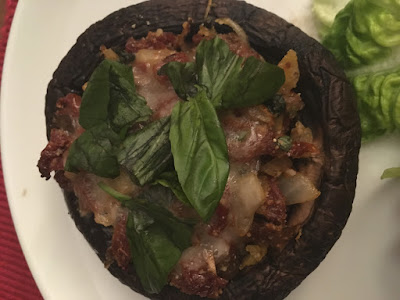 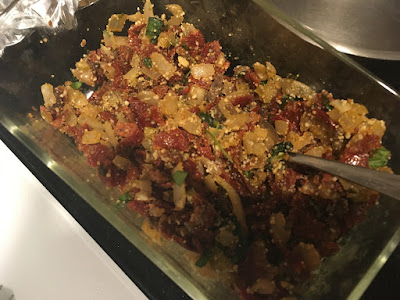 I started with the gnocchi because it was the main event, but for an appetizer we made a very cheesy stuffed mushroom recipe -- melty taleggio, Parmesean, etc., from Ottolenghi's Plenty.  I think I went too easy on the taleggio -- the picture in the cookbook is definitely way more cheesed over than ours turned out.  Lesson learned.  Also, the recipe didn't call for scraping out the portobello, just piling the filling on top of them.  I think it would be better with some scraping out.  So I'll try that next time.

It must be said though that the stuffing was amazing. I was skeptical reading the recipe, along the lines of "you want HOW MUCH sun dried tomato in there???" But it was rich and flavorful and the leftovers made some tremendous scrambled eggs the next day. Definitely the kind of thing I could see just making and using kind of like a condiment.  I feel like it would improve everything it touches.

There was also a very nice, simple goat cheese salad, which I didn't take a picture of because even in these photo-happy food memorializing times, sometimes I just forget.  And a small cheese plate to start.

And finally the cheesecake.  It was beautiful and utterly light and divine.  I quibble just a little bit with calling it "cheesecake," I think it was more of a mousse.  But whatever one calls it, it was definitely the high point of a very cheesy evening. 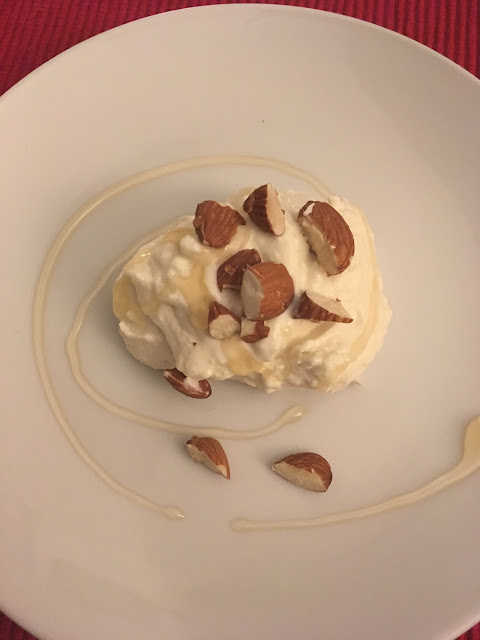 I have been feeling the need to bake.  But unfocused as to exactly what I should bake.  I thought about cookies, or a cake.  But having come currents leftover from my biryani project last week, scones jumped to the head of the list as the most natural thing to make.  A quick survey of options brought me to Cooks Illustrated's Proper British Scone recipe from issue 127.

Pretty simple, not overly sweet, I had all the ingredients in house, and it would use up most of the currents.

Here they are, raw and cooked.  They definitely did what you'd want scones to do, puffed upward but not outward, tall and, well, scone-y (as opposed to muffin-y or biscuit-y or cakey or bready). 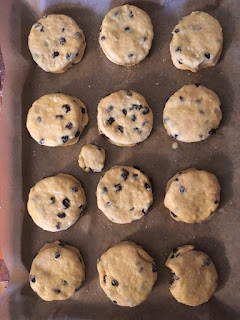 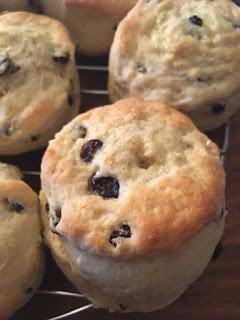 It's worth calling out the little "bonus" scone tucked on the pan in the photo above.  I can never bring myself to just throw out the bit of dough that inevitably is left behind once you've cut, pressed, measured, or scooped all the whatever you can out of a batch.  It was just as delicious as its full-sized relatives.

I lack a biscuit cutter, so extend a special thanks to the can of black beans I made into chili last night.  Since I hadn't recycled it yet, it served the purpose admirably. 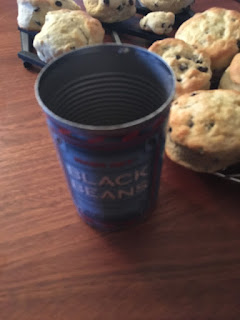 Below plated and ready for a test-bite.  I even had some proper orange marmalade (with champagne!) to spread on them.  Lastly, a look at the interior.  I'm really really pleased with them.  Like I said, it was totally easy to make the batter, which in turn was quite easy to work with.  I'm going to have to share them with friends -- my apartment is now chock full of proper scones.  I bet they freeze well... 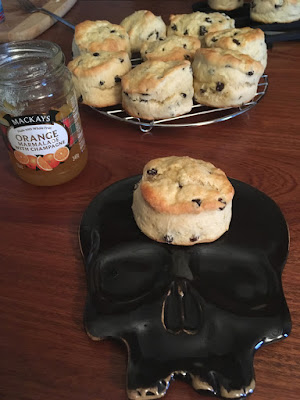 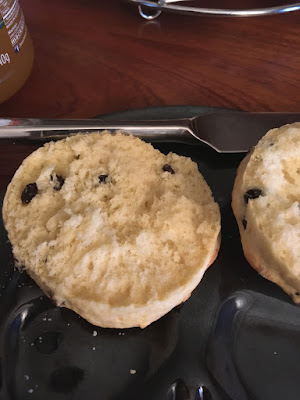