About a month ago, I was reading an article on Serious Eats, as one does, and among the suggested links was something along the lines of “26 amazing pressure cooker recipes.” And I thought, “I have a pressure cooker.  Maybe I should get it out of storage.”

Way back in 2001, my mom got me a top-of-the-line Kuhn-Rikon pressure cooker for Christmas.  Honestly, I don’t know what I was thinking of when I asked for it in the first place.  Maybe that I’d make beans with it?  I made boiled peanuts, and later cooked a mess of beans with it, once.  Following which I boxed it back up and stashed it in my offsite storage.  Why?  Well, my kitchen didn’t have much storage space (still doesn't!), and the thing takes up a lot of room.  And it’s such a large device, you can only really cook for a crowd with it. 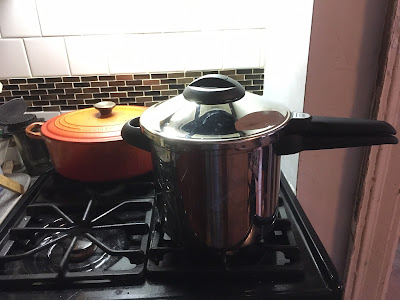 I never forgot it was there, this isn’t a story of rediscovery that way. But I never gave much thought to what I might do with it, either.  And yet, Serious Eats pointed out that you could take raw ingredients — chicken, chorizo, veggies, broth, and dried black beans straight out of the package, throw them in a pressure cooker, and have chicken soup in about 45 minutes.

So, a few weeks back, I unearthed the pressure cooker, checked the rubber gasket (still perfect after all these years—Kuhn-Rikon makes a great product).  Gave it a thorough wash, got the ingredients together, and tried making chicken and black bean stew.

It was amazing. It looked so wrong when I sealed the pot, and looked and smelled so right when I opened it back up again.  What went on in there?  Nothing short of kitchen magic. 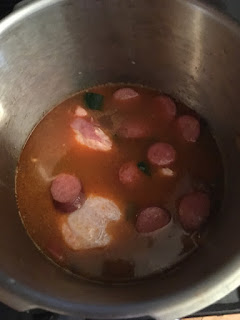 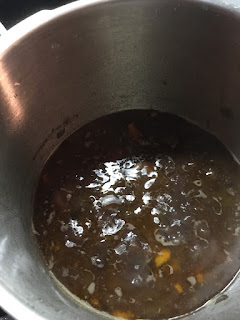 Since then I’ve made carnitas in about 90 minutes from cut up pork butt to tender, fall-apart perfection.

And I tried a third recipe last week: a Colombian chicken stew with just five ingredients.  Tomatoes, onion, potatoes, chicken, bay leaves (and whatever spices you like or have handy — I put in seasoned salt, pepper, and some smoked paprika--and, full disclosure, a couple of cloves of garlic).  It’s like barely even a recipe.  Cut up vegetables, throw everything in the pressure cooker, toss a bit, seal and fire it up.  No browning.  No liquid. 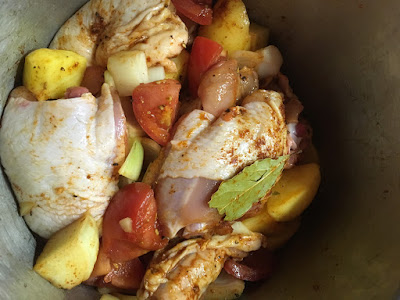 If I thought the black bean stew looked wrong going in, I was honestly worried about this one. But if you can’t trust J. Kenji López-Alt, whom can you trust?

And sure enough, after 25 minutes at pressure, I cooled the pot, popped off the lid, and was blown away.  Where did all the broth come from?  I swear, volume materialized from the ether. I know tomatoes are mostly water, but still.  Kitchen magic, yet again. 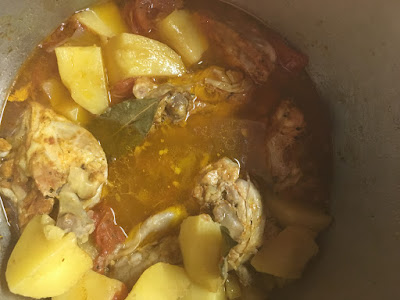 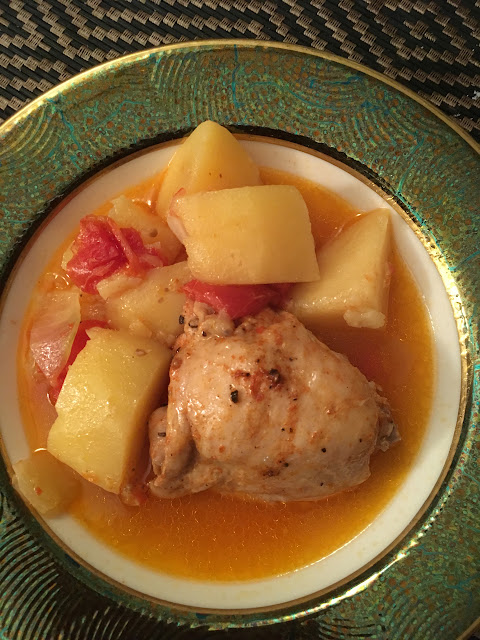 I have deeply embedded memories of a childhood with an old-school, constantly hissing pressure cooker, and dire warnings from my parents of the dangers it posed.  Next to that, my stealthy, silent Kuhn-Rikon is a little unnerving.  Each time I’ve used it so far, I’ve felt doubt.  I watch the little indicator thingy move slowly upward to peak pressure, but I still wonder, “Is it doing anything?  What’s going on in there?”  It’s not like you can peek.

I've long been focused on slow food. I guess it's only natural that now, after years of being enamored of sous vide and the long process of making no-knead bread, suddenly I’m bewitched by the super speed of the mysterious sealed pot.

Pressure cookers are literally the anti-sous-vide.  The former is about high temperatures, the latter about very low.  The former features trapping several atmospheres of steam in with the food, the latter removes as much air as possible from around whatever you’re cooking.

And yet both have their place.  I can’t imagine wanting to make carnitas sous vide when the pressure cooker does such a great job in, what, 1/24th of the time? But then again, I have little interest in putting a chicken breast or a pork tenderloin into a pressure cooker.

Right now, I am not sure where this relationship is going.  As I said at the outset, I’m infatuated and I know it.  I’ve got a bunch more recipes to try, but at the same time my freezer is filling with delicious leftovers from my previous experiments.  I’ll have to slow it down at some point.  But I feel happy, belatedly, to discover or rediscover the magic of cooking by pressure.  Fun fact: The idea of cooking food under pressure dates back to 1679, when a Frenchman named Denis Papin invented it. So I'm really late to this party.

Next on my to-pressure list is probably veggies for a creamy puréed soup.  Modernist Cuisine at Home states grandly that you’ve never had carrot soup until you’ve had carrot soup made from pressure cooked carrots.  I’m excited to put that to the test.

I'm deeply grateful Serious Eats for the inspiration, and of course to mom for the device.  It’s like she’s given it to me twice!
Posted by GothamJoe at 6:12 AM