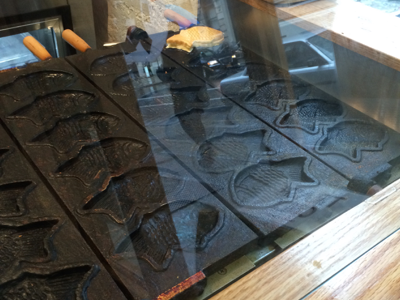 It would be immensely hard for me to pick a favorite restaurant in this great city, or a favorite recipe that I make.  My tastes ebb and change with the seasons and moods and other factors.

However, if someone asked me to pick a favorite street for food in New York City, that I could do easily.  The stretch of East 9th between 2nd and 3rd has long been home to a vast and diverse array of Japanese eat-and-drink-eries that have a special place in my heart. 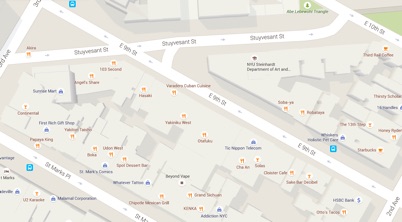 Sobaya for noodles, Decibel for sake, Hasaki for sushi, Village Yokocho for izakaya food...all, surprisingly, part of a mini-empire owned by a guy named Bon Yagi, and close to a number of my other favorite Japanese places, and the source of many happy food memories.

Which are now joined by a new one as Otafuku, the venerable, tiny, takoyaki stand on 9th Street has expanded to larger, fancier digs and added taiyaki capabilities as well!

Taiyaki is, like many Japanese things, easy and difficult to explain at the same time.  It’s basically a baked, stuffed waffle or donut, dough cooked around something sweet (bean paste, custard, chocolate...), and shaped like a sea bream, or tai.

Why a fish?  Well, there’s a homophone in Japanese between “tai” the fish, and “medetai,” which means to celebrate.  And these yummy pastries, which you find in Japan at fairs and what-not, are wonderful--served warm from the taiyaki iron, they always make me happy.  Not that run-of-the-mill non-fish-shaped donuts don’t make me happy, but the fish-ness of them is an added bonus.

So, anyway, I was in the neighborhood today and I finally stopped by and got myself a taiyaki as a treat.  And instantly I was a junior in college again, in Kyoto for my year abroad, and every day full of new things to explore and experience.  Not all of them as sweet as taiyaki, but still.  A memory worth celebrating.
Posted by GothamJoe at 11:41 AM 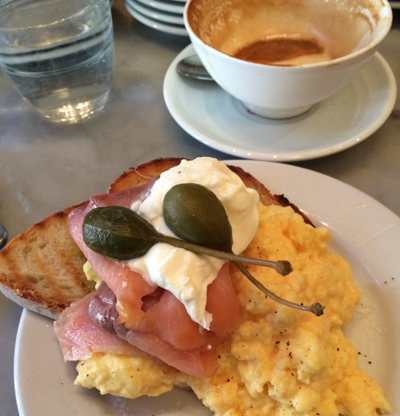 Lunch with my friend Laura today at Buvette in the Village, a totally charming place where, among other things, they make scrambled eggs via the unique technique of frothing them with an espresso machine pressurized steam frother.

They’re exactly as light as you’d expect, perfectly cooked, and terrific with smoked salmon, a dollop of creme fraiche, caper berries and some great bread.
Posted by GothamJoe at 4:00 PM 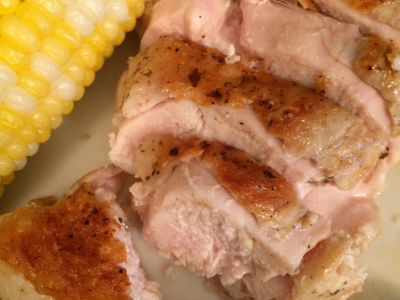 As threatened, today I made my first ever sous vide chicken.  I feel pretty awesome right now, we’ll see in 24 hours or so if I’ve poisoned myself.  Optimism rules, and photos follow! 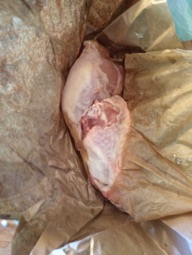 The raw materials and the mise en place.  The authority assures me that you can safely cook in ziploc freezer bags, as long as the temperature doesn’t get too high.  So, here I go. 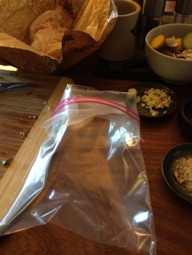 I wanted to use boneless skin-on breasts, which are hard to find.  No photos of me boning the chicken because (a) it’s been a long time, I turn out to be rusty at it and (b) I didn’t dare touch my phone while I was all chickeny.

I was going to cook two and then I had a moment of panic:  I think my biggest pot is too small to circulate water adequately around 2 breasts at once.  So breast 2 is in the fridge, I’ll do it tomorrow.

I put a little canola oil in the bag with the chicken, and some seasoned salt and pepper.  Kept things simple.  There’s a neat trick to get the air out of a ziploc when sealing it:  submerge it (carefully) up to the top in water, and let the water pressure push the air out for you.  Having no vacuum sealer, I'm glad someone thought of that.

Meanwhile I decided to make sure the thermostat on the Sansaire was correct, so pulled out my candy thermometer.  The verdict:  if it’s inaccurate, they’re both equally so.  Which seems unlikely.

I decided to do the breast at 144 Fahrenheit.  Modernist Cuisine at Home and Serious Eats both say 140, but a little more seemed prudent and given you’re “supposed” to cook chicken to 165, still radically lower in temperature. 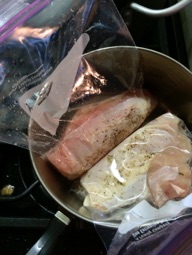 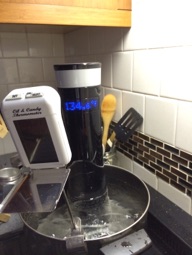 These are before and after shots, though they look more or less the same.  I should’ve aimed at the chicken more.  Anyway, I dunked it for 40 minutes, then opened the bag (carefully!) and took its temperature (also carefully!) to verify that it was indeed a bit above 140 internally. 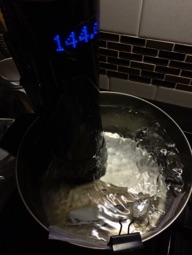 Modernist Cuisine at Home says let it go for 25 minutes after that to sterilize.  I went for 45, because I was in no rush, and sous vide means it’s almost impossible to overcook.  So if you’re doing the math, that’s about 95 minutes of cooking time.


And the finished (nearly) product: 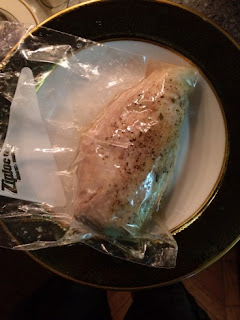 Doesn’t look too promising in the bag.  But I had a skillet at the ready with super hot oil, and plunked the chicken in for a quick browning.

And here’s the really finished product.  I did a much worse job than I usually do with the plating, mainly because I was so excited to cut into it.  And eat it. 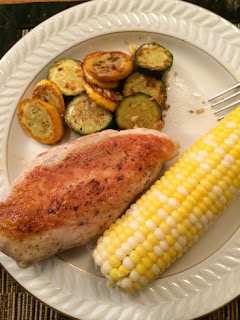 Here’s the inside.  It wasn’t exactly pink but it definitely wasn’t the usual cooked chicken color either.  Let’s call it pinkish.  But texture-wise it was great, and seriously I’ve never had a chicken breast as moist as this one.  Much less one that I cooked myself. 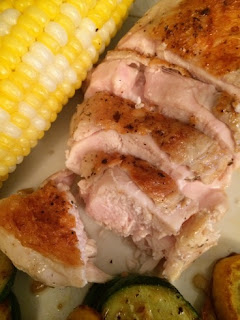 I think I want to do this a few more times before I do it for company...chicken being kinda dangerous, I want to make 100% sure I’ve got it down, and that I don't food poison myself, much less other people.  But I could do pork chops for company any time!

The Sansaire adventures will continue!

Posted by GothamJoe at 2:46 PM