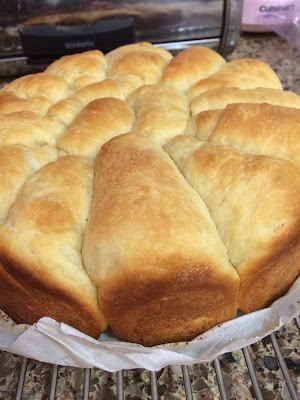 This year for my contribution to Christmas dinner I took Cooks Illustrated's latest dinner roll recipe for a spin. The CI guys were all excited about something called a tangzhong, which was apparently invented in Japan and has been around for some time, but is only now getting the Cooks Illustrated treatment.
A tangzhong involves making a paste out of flour and hot liquid, and actually cooking it together for a bit until it hits a pudding-like consistency.  This mixture is then combined back with the rest of the ingredients for a yeasty roll.
The theory goes that hot flour absorbs more liquid, and so adding that step results in rolls (or bread) that's got a super-pillowy crumb, and the layers within the roll end up almost flaky.
"That's not the only thing that's flaky here," I thought, but hey, it's not like I had anything else to do once the presents were opened.
The other thing CI does in the recipe that's a little unusual is their technique for forming the rolls--instead of just rolling little rounds of dough, you actually flatten and tightly roll sheets, before putting them in the pan for a rise and a bake.  Here's the raw material: 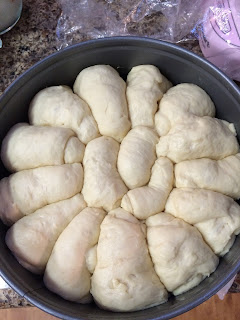 And here's what they looked like post-cooking.  Very pretty. 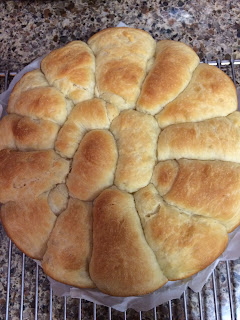 And finally here's a roll in mid-dine.  I really liked them, though I'm not sure they were THAT much superior to just a plain old ordinary parker house roll.  Still, it was fun to try a new technique, they didn't come out of a can, and they got rave reviews at dinner, always nice validation for my baking skills. 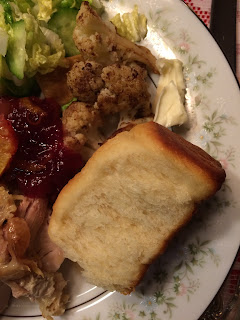 Posted by GothamJoe at 2:29 PM