Bright and early Sunday morning my friend R. and I took the second of our two planned 2015 cooking classes at ICE last weekend.  This time it was pasta from scratch, with Chef Gerri Sarnataro.

It was a good class, though the sort where everyone divided into teams and made at most 2 things, rather than everyone having the chance to do a little bit of everything, which helped make the Puff Pastry class so rewarding.

The other thing about pasta is there's really no trick to it.  one egg for every 100g of type 00 flour, maybe a little salt, and knead like crazy for 10 minutes--or a little longer if you're not a great kneader (I'm not). Still, there's a pleasing bit of kitchen magic that happens as flour and egg come together and alchemy (and gluten) turns a dusty mess into a smooth, pliable, user-friendly dough.  Here's the before picture (I forgot to take an after, but it really is like alchemy how something this unpromising becomes smooth, shiny, and totally pasta-able. 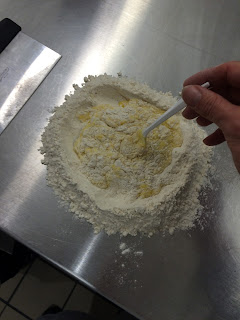 Ultimately the group made two raviolis, a tortellini, fettuccine and pappardelle, and six sauces to go with the assorted pastas.

R. and I put ourselves on a ravioli team (butternut squash to be exact) since I wanted to have a chance to make some of those.  We also made browned butter with sage to go on the ravioli, kind of the classic thing to do. And we made a pea-and-crimini-mushroom cream sauce for some of the fettuccine.   Here are some of the raw materials. 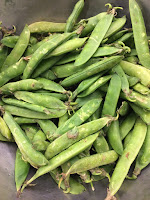 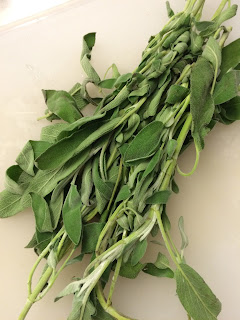 And here's the squash, in progress, post roasting and pureeing. 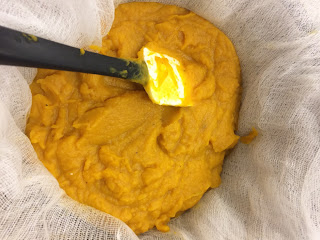 I was a little concerned about the quality of the ravioli--they seemed very haphazard and irregular as we were folding and cutting away.  But they definitely looked nice all set on their pan. 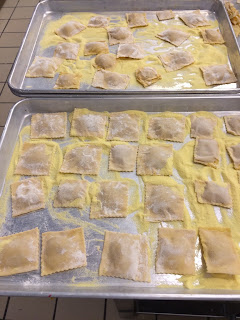 The other sauces were an onion confit-based one that was terrific, a simple herb butter (for cheese ravioli), and two bologneses: one very meaty and one duck-based that actually started with a whole duck.  I kind of wish I'd gotten to participate on team duck pappardelle, as it's one of my favorites.

Still though, we all got to taste a little bit of everything.  I'd been expecting I'd have a ton of fresh pasta to take home with me after, but we pretty much ate everything we made.  I guess it's best made and eaten fresh, anyway.

I'm torn between "carb-o-riffic" and "carb-tastic" as the better adjective for the overall experience. I've owned a pasta maker for years now--my hope is that this inspires me to actually get it out and have people over sometime this winter. 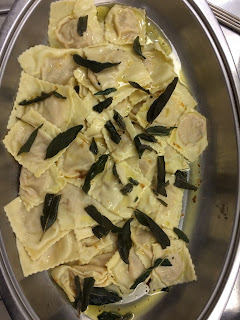 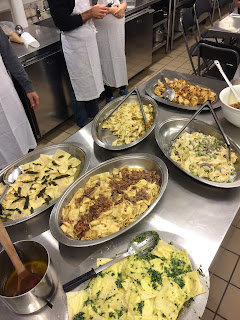 Posted by GothamJoe at 9:00 PM