Canelé and Macchiato at Frisson Coffee 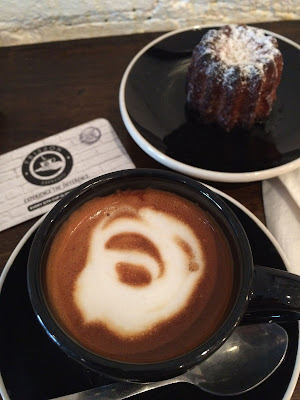 I had a picture framed last week at a place in Hell's Kitchen and last weekend found myself walking west on 47th Street.  Happily so, as I stumbled onto Frisson Espresso, a non-chain, high-quality, charmingly artsy coffee place tucked away midblock.

They made me a very pretty macchiato, and I had an even prettier canelé. As you may know or can see in the picture, they're small, specialized pastries, known for a caramelized outside and a bread-pudding or custard-like inside. They're from Bordeaux, and although they've been below my radar, apparently they're quite the hot pastry in NYC recently. At least, Serious Eats has covered 'em.

I think this was my first one ever. It was delicious, and interestingly it made me think of a dessert I grew up with. Cascaron are essentially Filipino donuts, deep-fried conglomerations of coconut, rice flour, and sugar.  Very unhealthy. Being coconut based, they taste nothing like canelé. And yet, the combination of textures, crisp giving way to toothsome, soft-but-chewy interior, was evokative.

Thinking about desserts of my childhood reminds me that I should write something about malasadas at some point.

In the meantime, if you're in Hell's Kitchen, stop by Frisson.
Posted by GothamJoe at 8:11 PM