Dinner at the Metropolitan Opera

A good meal anytime is a joy.  But a good meal when you weren't really necessarily expecting one is especially nice. This is relevant because a few weeks ago, I had dinner at the Met's glitzy Grand Tier Dining Room, a true New York capital-I Institution, and someplace I've wanted to eat for as long as I've been a cultural aficionado in this great city.
But really, being where it is, I wasn't expecting much out of the Dining Room.  I mean, it's in the MET! People go there because it's part of a night at the opera, not because the food is any good. Also, consider the average age of a patron! Mushy pablum and geritol were about as much as I expected from the menu.

So I was pleasantly surprised, indeed, that the menu had some interesting things going on, and more than that, everything we ordered was really well executed, especially given that they are on a super-strict timetable to get patrons fed and in their seats in the auditorium in time for the curtain. 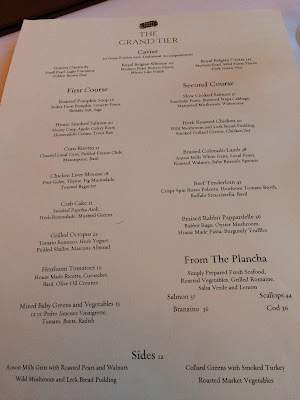 That said, I am compelled to point out the caviar options at the top of the menu, going up to the $135/30g Royal Belgian Osetra. We opted out of a caviar course.

To start, we got the octopus and the chicken liver mousse (with port gelee and fig marmalade..mmmm). I try to avoid eating octopus because I think they're cute and they are undeniably very smart. But they are also undeniably very delicious, so once in a while I give in.

This particular cephalopod was fantastic, a single tentacle, and whatever they did to it left it perfectly cooked and amazingly tender. A little romesco and some herby yogurt were nice complements. The mousse was super-rich--I was glad we were sharing because I think a whole serving would likely have proven lethal--to my ability to stay awake through Act I, if not to my actual life. 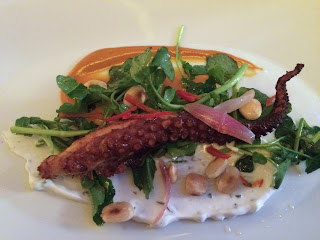 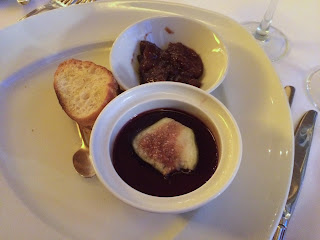 For the main, we shared again, going for the Branzino "from the plancha" accompanied by the wild mushroom+leek bread pudding and the corn risotto. The branzino was done to a T, tender and moist and not at all overcooked, and the squash and roasted romaine on the side were very nice as well. And the sauce, not pictured, was a treat. Super fresh salsa verde, bursting with herby flavor.

I love a savory bread pudding! It's like stuffing, but classier. And this one was quite pretty, to boot. 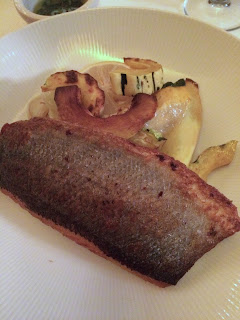 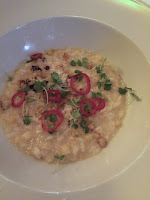 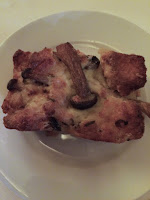 With that, we were off for the first part of Donizetti's "Anna Bolena." But we placed an order for dessert before our departure--  "Otello's Bitter End," the thematic dessert of the season. And, lo, when Bolena was spurned by Enrico Otto and intermission rolled around, we returned to our table to find dessert awaited us as surely as the executioner awaited Anne Boleyn. But much more sweetly. 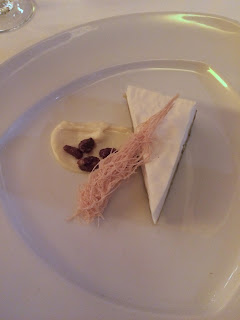 This, unfortunately, was not a great success. Pistachio cake with "orange blossom water mousse," phyllo, and sesame creme. It's clear what they were trying to do with it-- Mediterranean/ Turkish flavors done in a Western/Italian mode, much like Cyprus or poor Otello himself, trapped between worlds. But in practice the phyllo was spiky and disruptive (maybe it represents Iago??), and the cake+mousse didn't quite come together--kind of a not-so-great cheesecake. Still, I give them credit for trying to tie something into the season's repertory.

In happier dessert news, there's a chocolate souffle on the menu!  I'm all about bringing souffle back (foreshadowing a future post) so was glad to see that.

Finally, all of the staff were just lovely. We felt very well taken care of, and when we had a bit of drama (the woman sitting next to us accidentally took my friend L's coat along with her own) it felt like the whole of the dining room were mobilized to recover it. And sure enough, when we returned for dessert, L's coat was safe and sound, right at our table. Drama averted.

So, consider this one a surprise and a delight. All credit to L., who suggested the Dining Room when she agreed to see the opera with me. After all these years of looking down from on high at patrons having supper there, now I know what it's like! 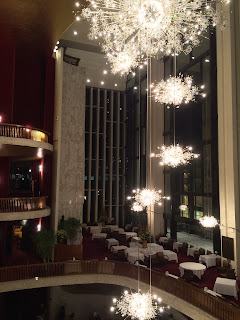 I'd gladly do it again, and highly recommend it as a way to make a night at the opera even more memorable.

Posted by GothamJoe at 5:01 AM