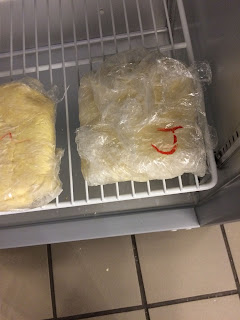 On Saturday morning, my friend Rachel and I took a class at the Institute of Culinary Education, on "Fast Puff Pastry." I confess I suggested it kind of as a lark, because puff pastry is one of those things that's really better bought, frozen, rather than making it from scratch.  And it's not like I ever use the stuff, anyways.  And how fast can you really make it?

This was one of those great classes, because I went in with one mindset and I came out with quite another.  My eyes were opened!  Puff pastry is incredibly easy to make!  It's so fast!  And so versatile.  You can do anything with it.  I may never make bread again.

I didn't actually think to photograph the process of making it (dough!).  But if you saw how easy it was, well...some things are better left unkown.  To the left is my dough, after a well deserved rest in the fridge.

First, here's some farfalle (not the pasta, but rather spidery things that we did with cinnamon sugar):
A little rolling a little slicing a little chilling a little press-and-twist, some time in the oven and voila!

Rachel made a very nice tart shell, involving docking (with a docker!) the pastry (putting tons of holes in it), building little side walls, and pre-baking.

We went a little crazy with making things, frankly, but in the best possible way.  I'm totally inspired, and my next cocktail party will be laden with enough buttery, flaky canapes to kill a small hoofed animal.

A few more to leave you with:  Rachel's Apple Almond Tartlet, Paprika-Parmesan Palmiers, and Smoked Salmon and Cream Cheese Mille-Feuilles. 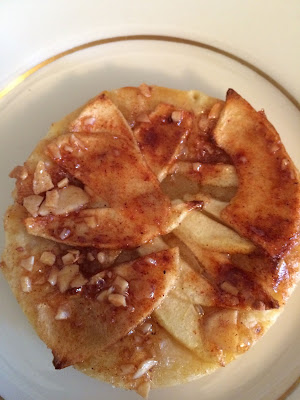 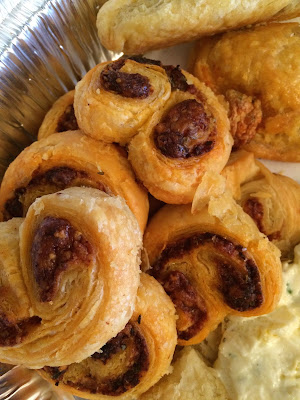 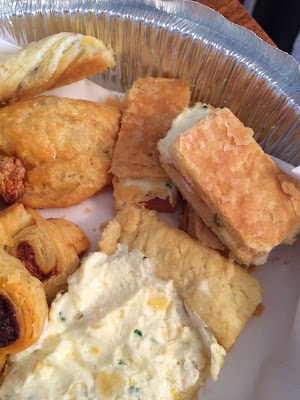 Posted by GothamJoe at 8:10 PM