Recently I've found myself wanting to make a souffle. When was the last time anyone anywhere made one of those? I feel like they are so hugely unfashionable they're due for a comeback. Anyway, I've made souffles before, and for all the reputation, they're not so difficult. I'm pretty fearless in the kitchen, if I do say so. Aside from beef-based dishes (I've been off bovine flesh since Mad Cow Disease), there's very little I can think of where I'd say "I'll never cook that." I've never made a lobster, but I certainly would. Ditto bunny rabbit.

A relative of a friend of mine died recently, which led to an interesting series of Facebook posts titled "Shit My Aunt Saved." Among them was this gem of antique cookware: 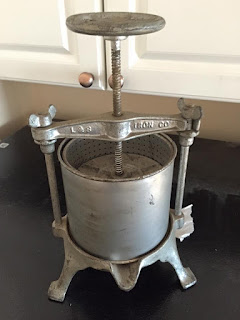 She identified it as a fruit press, but I am pretty certain that it's actually a duck press, the key gadget/torture implement in making the most flamboyant and grossest of French dishes, canard à la rouennaise, literally translated as duck in blood sauce, but more often called 'pressed duck' in English. For pretty obvious reasons.

I'll direct you to the nice folks at D'Artagnan if you want to know more about the theory and practice of pressing a duck. But (a) I wonder if my friend's aunt ever actually DID make a pressed duck, because that's pretty badass.  And (b) holy jeez, that's a thing I'll never cook.

Posted by GothamJoe at 6:40 PM